Thirty days ago, two weeks before the last Fed meeting, I expressed to your audience my belief that the Fed will find itself free to blink. Not the steering, not the suspension, and certainly not the cuts, but being less tough on the remainder of their tightening strategy.

Indeed, this was what Chairman Powell expressed in his post-meeting press conference and was reiterated in the release of the minutes. I think global markets have overpriced the idea of ​​blindly hawkish central bankers into nefarious assumptions about the possibility of a deep and prolonged recession.

Until recently, it seemed like 90% of the world’s central banks were following the same tightening pattern and assumed that would continue regardless of economic slowdown.

Last month I said that, in my opinion, the Fed is not trying to control inflation. The previous four hikes of 75 basis points had no material impact on the cost of living, which you could say made housing more expensive.

Let me give a high level example to illustrate what I mean. I’m an entrepreneur and I want to make a widget and bring it to market. I have to determine how much to borrow, build the factory, buy capital equipment, hire people to operate the machines, and with the materials I need to buy, make and sell 1 million units at $1.50 each, achieving an 8% IRR.

Then the Fed changed the equation by raising my cost of capital from 2% to 7%. Now I have to re-assume and realize that I have to sell the widget to $2.25 to keep the same IRR. But, at that price, I probably wouldn’t be able to sell a million units. If I keep the price at $1.50, then I’ll have to be happy with a 2% IRR. The Fed just stopped me from borrowing money.

So instead of directly trying to control inflation, the Fed controls the money supply and velocity, which should have a negative effect on inflation over time. I think the idea of ​​the Fed tightening at will without regard to the economic impact is ludicrous, hence why I believe they will find the latitude to pursue their tightening targets more gradual. In any case, thirty days later, that seems like a valid assumption.

Last month, I also suggested that if the Fed does tend to pursue its tightening goals more judiciously, we are likely to see, among other things, that the dollar weakens at a time when it is unusually strong. 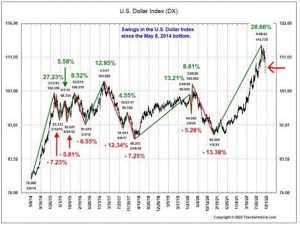 In fact, on Friday, Nov. 4, the day after Wednesday’s Fed meeting concluded, the U.S. dollar index had its worst day since December 2015. If a stronger dollar causes the market to negatively reprice the income generated by lower risk purchases of products in weaker foreign currencies, then I think the opposite would be a positive catalyst if the dollar pulls back from its all-time highs. It seems to me that this is working.

I also refer to a chart from last month that juxtaposes the current tightening cycle with other major tightening cycles over the past 35 years. Obviously, this cycle is the most restrictive cycle that we’ve seen in that time. Because of this, areas of our economy are showing significant weakness. 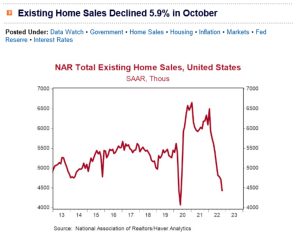 Mortgage rates on 30-year amortized mortgages topped 7%, up from 2.50% in February, according to Fannie Mae. The Fed’s shrinking of its balance sheet has led to higher bond yields, which has led to higher interest rates on these mortgages. This tightening cycle seems to have started when real estate peaked and we can see the gut reaction since the peak.

It seems to me unreasonable for the Fed to be unaware of the assumptions of these indicators in pursuit of its tightening target. A less hawkish policy stance could lead to a moderation in negative trends in areas such as real estate as well, raising the risk that the market repriced previous assumptions that might have been wrong.

Housing is just one major area of ​​the economy where we could see the impact of Fed policy.

As for the manufacturing side of the economy, we are just one step away from contraction territory. 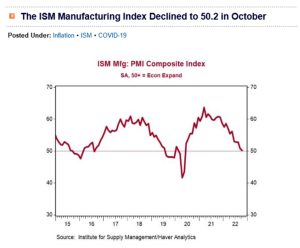 In terms of the service sector of the economy, we are slightly above the expansion and contraction line, but the rate of decline appears to be greater.

I could cite many examples of indicators of economic deterioration. These are just three of the more important macroeconomic indicators. I believe a less hawkish Fed is signaling to the market that it does realize how much the economy is struggling to expand or contract, and because I believe the Fed wants to avoid stagflation, I believe a data like this will heavily influence the Fed’s actions going forward, the market React positively to this development.

Last month, I referenced a chart that depicted the state of sentiment across the economic cycle. I stated at the time that I thought we were approaching a capitulation phase, and thirty days later, I believe we have increasing, quantifiable evidence that this may be the case. 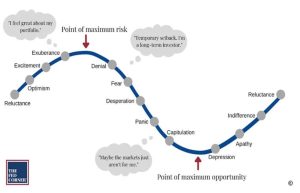 All of this is important because if we do consolidate near the bottom and you’re not in the market then in my opinion you’re taking more risk because when the recovery happens you talk yourself out of the recovery .

So what quantifiable data do we have today that wasn’t so clear even thirty days ago? In last month’s article, we talked about Stochastic and how at a high level it is the art of observing patterns of behavior, connecting the dots to form patterns or Bollinger Bands, from which insights can be gleaned.

So let’s take a random look at the market. This diagram is not drawn by me. Market participants chart this chart with their actions. You are looking at the same data represented in two different ways. 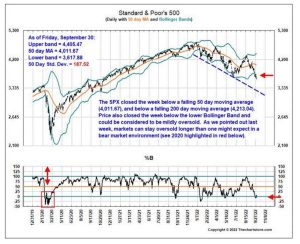 The top chart reflects relativity’s rolling, smoothed time period, and the bottom chart is a linear depiction of the same data. At the bottom of this chart, we appear to have bounced off the same Bollinger Band four times in February, May, July and September. That’s where the market is telling you, it collectively believes that risk is fully priced in at these levels. If you see a double bottom, that’s encouraging. Triple bottoms are exciting. If you see a quadruple bottom, pay attention.

I’ve had a feeling lately that the world is collectively pricing in more risk than rationality in market valuations. I believe the market has already priced in a long and deep recession, caused by central banks around the world turning a blind eye to the economic impact of their actions. If that’s the case then I have to ask how aggressively the market is going to retrace those losses when we bounce off the same Bollinger band for the fourth time if it turns out to be different from these assumptions and therefore why a few weeks ago the Fed was A key piece of the puzzle. 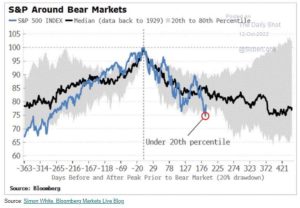 This graph seems to indicate that we are in one of the worst bear markets we have seen since 1929, if not the worst, 176 days into the cycle. Now, by itself, that’s not actionable data. But when you look at the big picture, there’s evidence that the dollar is weakening from record strength and seems to hold the same support four times this year, and we’re relative to all the bear markets, you start to get the sense that the market may be overpriced for the evil own assumptions.

So, now we start looking for evidence of surrender. To me, it’s proof that the average investor is racking their brains to metaphorically say I’m done, lock in the loss and get me out. Well, I believe we did it in September.

Also Read :  Janet Yellen: Treasury secretary says she's not seeing signs of a recession in the US economy 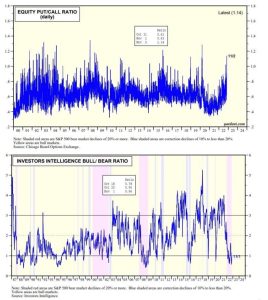 This chart is busy, but it paints a picture of the level of fear in September. The open-to-put ratio hit its highest point this year, the highest it has been since early 2020, when the economy was shut down by Covid. Below that, you see the bull market ratio, at its lowest point since 2008 in September and the Great Depression. We don’t have this in July.

Additionally, mutual fund outflows rose sharply in September, a feature of the capitulation we often talk about.

So, let’s recap. By the end of September, only 3% of stocks in the S&P 500 were trading above their 50-day moving average. We bounce off the same Bollinger Band for the fourth time as the ratio of open puts to calls hits a new high for the year, bearish sentiment is stronger than at any point since 2008, mutual fund outflows surge, and near-record dollar strength Risk of lower-than-anticipated revenues resulting from market re-pricing of repatriated dollars.

This is why you never want to give in to the urge to surrender. If you do this at the end of September, you risk missing out on the best October in 45 years. For context, the last time we had such an active month in October, I was in second grade.

So, in conclusion, regardless of the time period or economic conditions, the achievement of your long-term goals depends on you meeting the consistency of strategy implementation. The composition of the investment account will change to reflect the current period, but the approach, dedication and commitment to the strategy should remain steadfast. Even missing a few years, letting a period of turmoil pass you by, can be detrimental to the potential success of long-term planning for the next 40 years. I know everyone is tired of this weird and unique year, but I believe we’ve seen a tipping point, and it’s time for faith and steadfastness to continue working through times like this and avoid the emotional rollercoaster ride that comes with it risks of.

David R. Guttery, RFC, RFS, CAM, is a financial advisor of 31 years and president of Keystone Financial Group in Trussville. David provides products and services under the following company names: Keystone Financial Group – Insurance and Financial Services | Ameritas Investment Company, LLC (AIC), Member FINRA / SIPC – Securities and Investments | Ameritas Advisory Services – Investment Advisory Services. AIC and AAS are not affiliated with Keystone Financial Group. The information presented has been gathered from sources believed to be reliable; however, we cannot guarantee their accuracy. This information should not be construed as a recommendation to buy or sell any securities. Past performance is not indicative of future results.